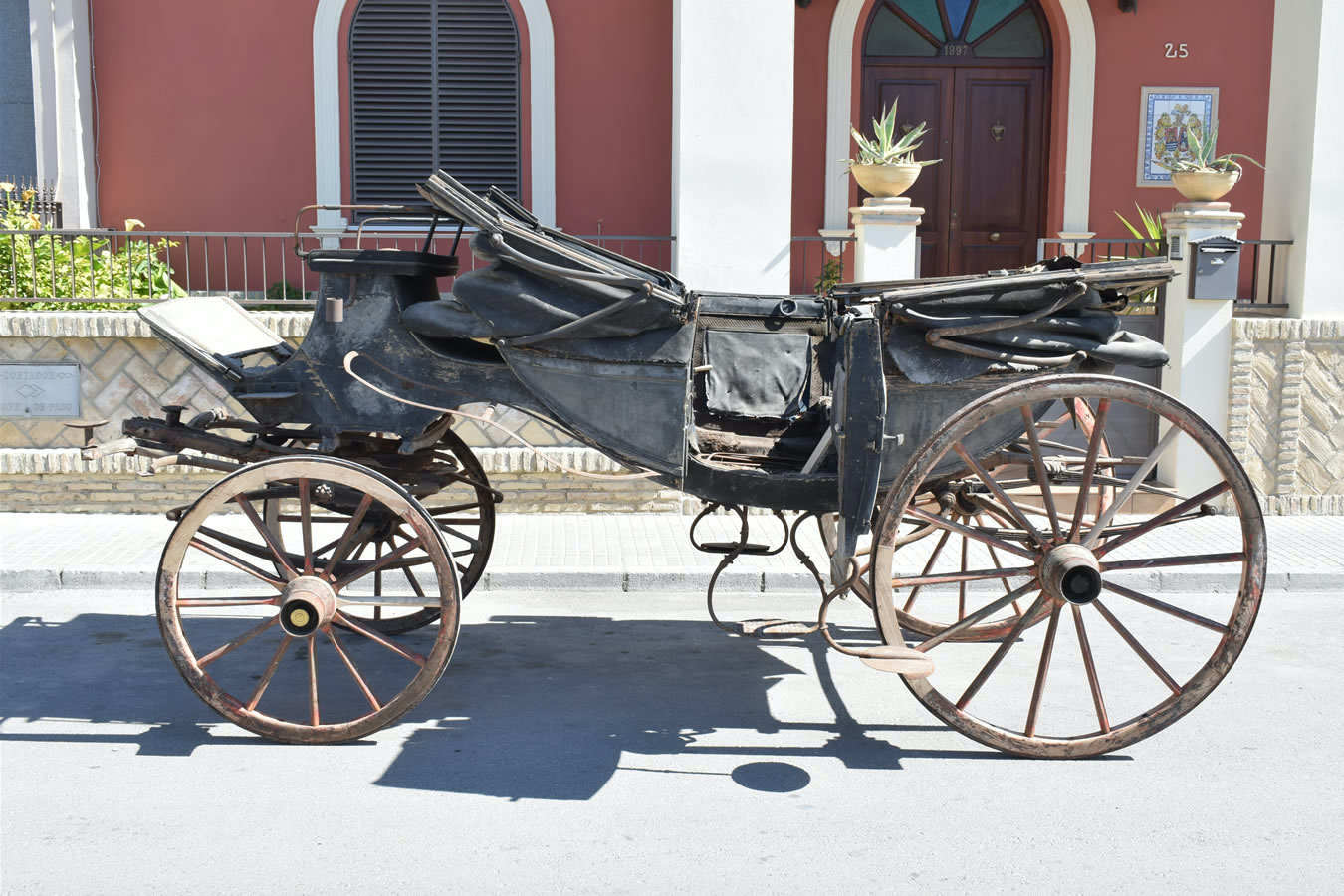 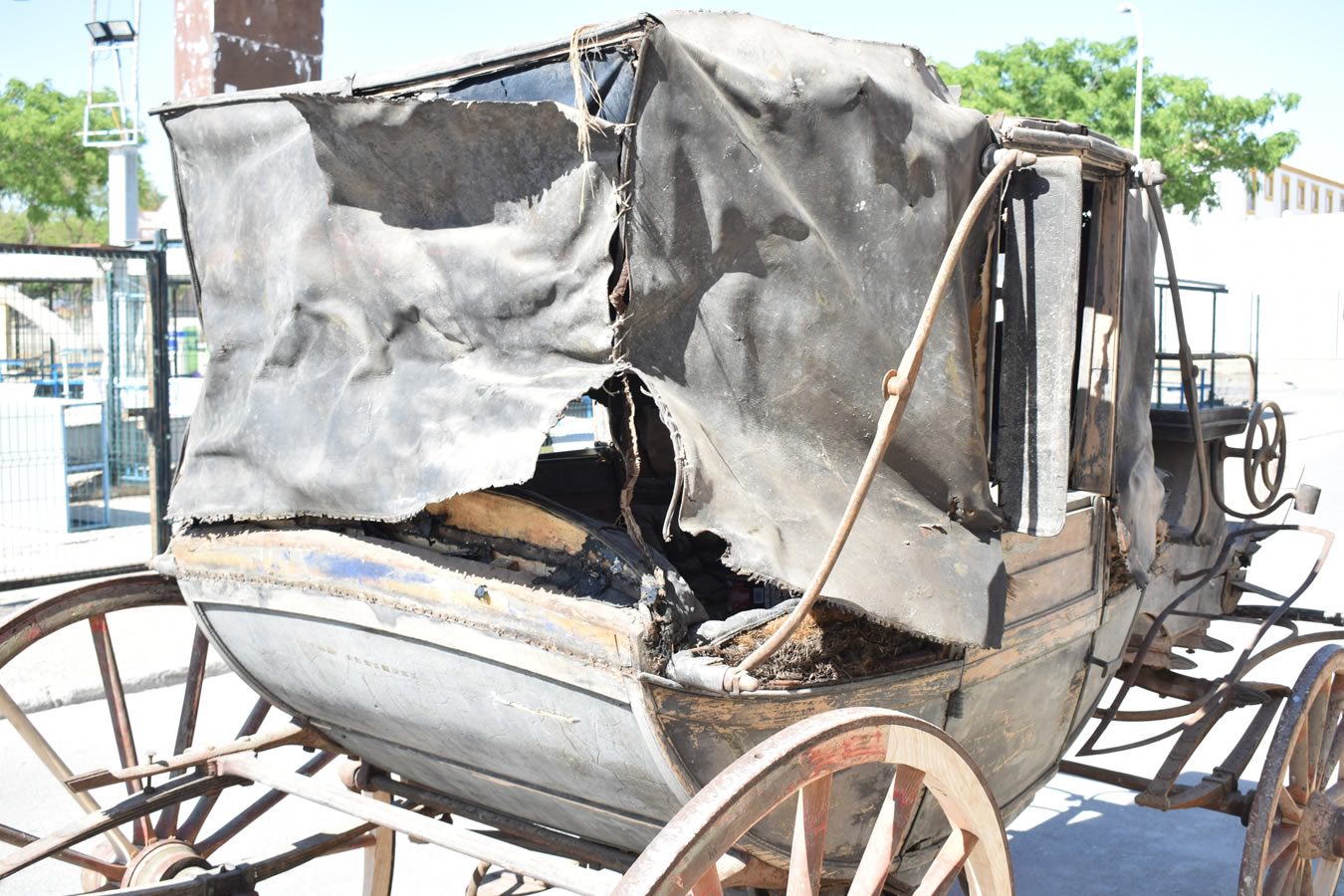 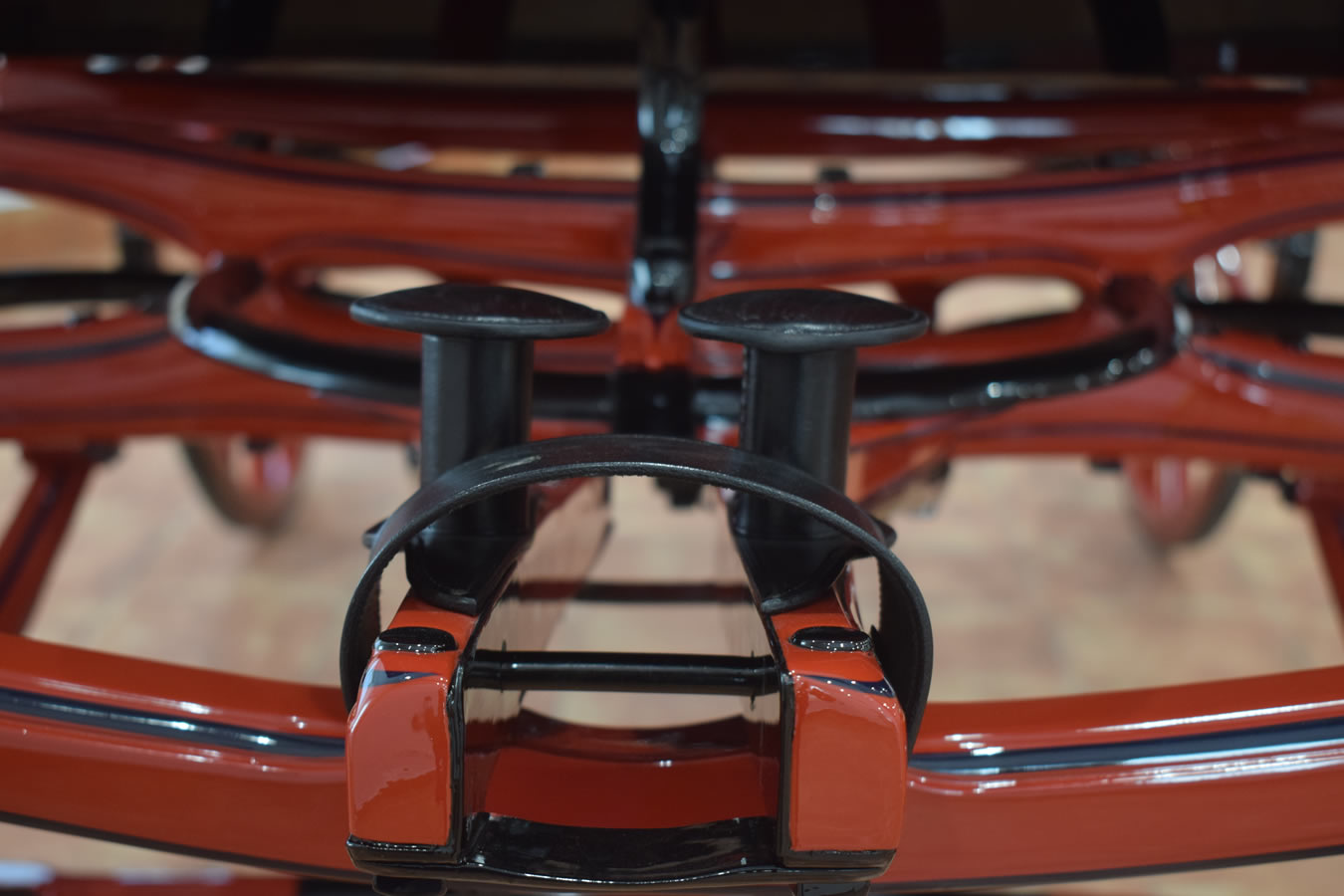 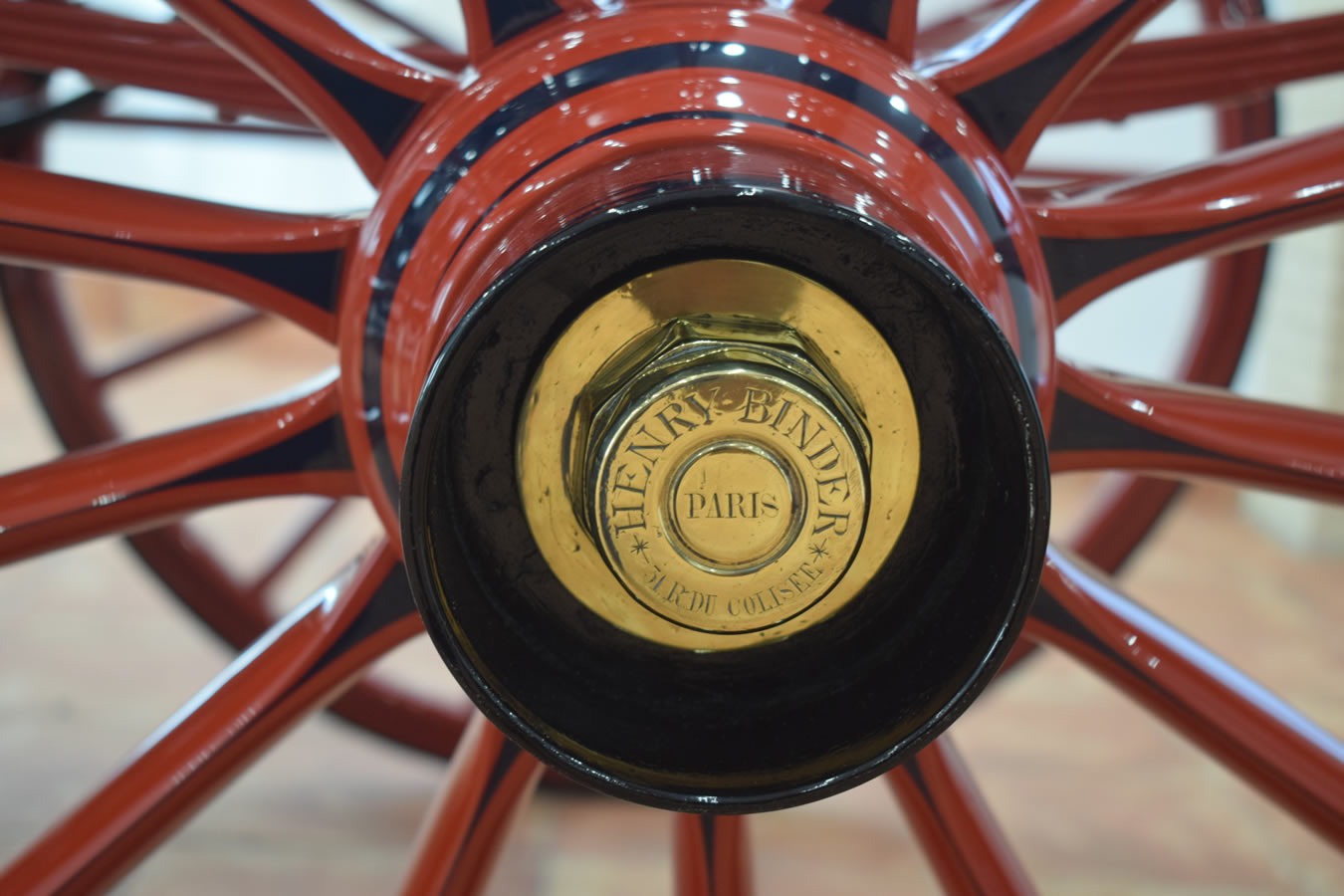 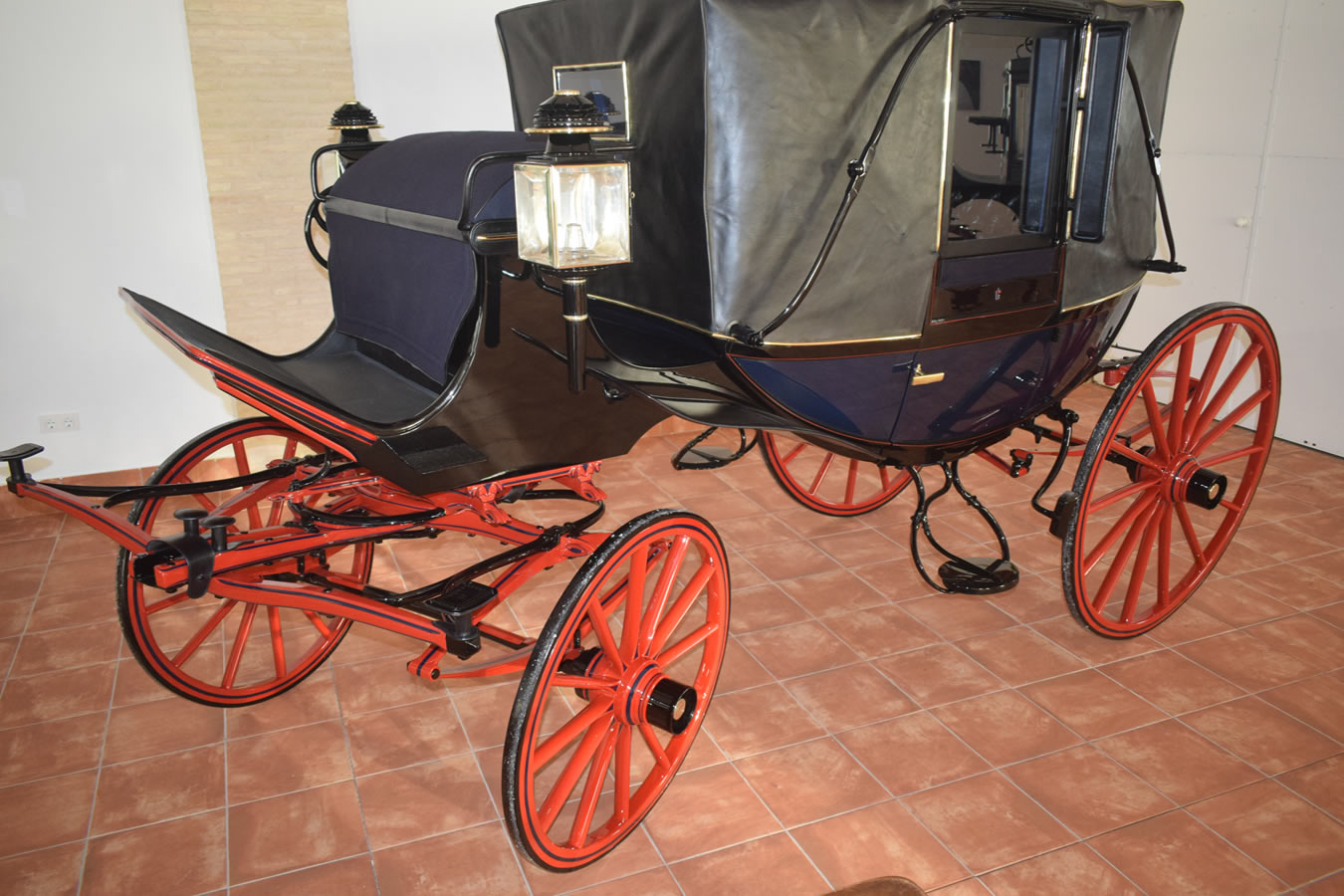 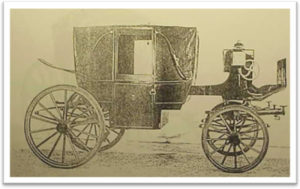 This type of carriage is original from the city of Landeau in Germany from which it receives its same name.

At the end of the eighteenth century began to appear these first models of carriages, with square box and also with the round box, to be called luxury coach was widely used in large ceremonies and even in Imperial Houses.

It was in 1850 in France where it began to perfect its shape and later in England, where from that date became one of the most used carriages at all times, discovered in summer and covered in winter.

The hoods open and close very easily backwards and forwards and the box remains completely airtight, which is why it used to travel even on rainy days.

There is a great accumulation of dust and dirt on the entire surface with a clear oxidation of the hardware in the stirrups and seat rails with dirt in general and oxidation in the rest of the metals.

The whole surface of the paint is deteriorated with lack of preparation layer that leaves the wood without protection. Repeated and no view of the coat of arms of its first owner of the time that is in the faces of the sides, by the passage of time.

There are cracks in the whole piece, which show a clear instability in the joints of the wood and are sources of rot of this already clearly affected by the attack of xylophagous insects. All this causes the frame to be very weakened and does not adequately fulfil its supporting function.

Finally, a generalised ageing of the material can be seen, with high levels of fragility and wear of the material of fins, dashboard and hoods, as a consequence of changes in temperature and wear due to their use, with breaks and loss of various points of seams in hood folds being highly visible.

The proposal of action is approached under the principle of material conservation and complete recovery of the functionality of the vehicle, but respecting its authenticity, through a minimum action as far as its material and chromatic reintegration, respecting at all times the fundamental principles to be taken into account in any action: stability, reversibility and discernibility

The process began with the transfer of the carriage to the conservation-restoration workshops, where, after an initial ocular inspection, a detailed study of the carriage was carried out, including the analysis of samples and photographic reproduction using natural, ground and ultraviolet light techniques, and compared with the corresponding historical and technical study.

The entire box treatment process is carried out, eliminating dust by means of mechanical cleaning with the appropriate adjustments of the metals and proceeding to priming and painting with the colours blue and black filleted in red, including the doors on the sides.

The entire treatment process of the wheels is carried out, in which different specific cleaning treatments are undertaken for the metal and painting for the complete volumetric and chromatic reintegration of the pictorial layer in red and filleted in blue.

Following the same methodology and restoration criteria, the treatment of the bass is completed, consolidating all the ironwork by treating the areas oxidised by sandblasting and starting the process of chromatic reintegration on a red base cut in black and filleted in blue and to finish with the application of a varnish that allows the recovery of the original tones while protecting the piece for the future.

The proper procedures are followed for the historical fabric for the treatment of the upholstery to return it to its original color and orthogonality by relaxing the fibers through moisture, adjusting them to their correct size to correct deformities from use.

The leather of the hoods, front and rear flaps are replaced with black leather.

After completing the appropriate treatments for the lanterns, spears and rockers, the intervention process is concluded and documentation is generated for the entire project, including its technical data sheet and the corresponding maintenance and conservation procedures.