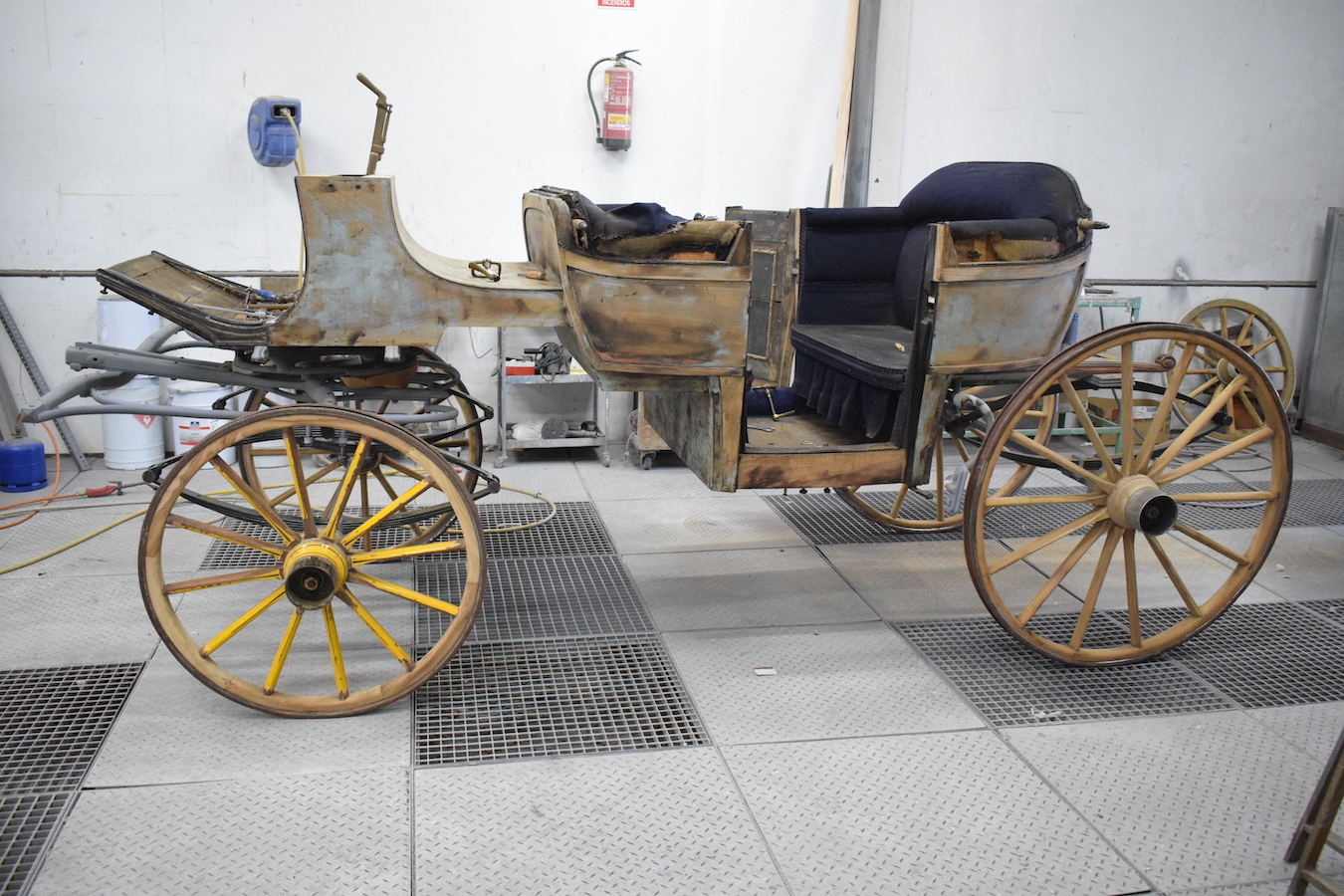 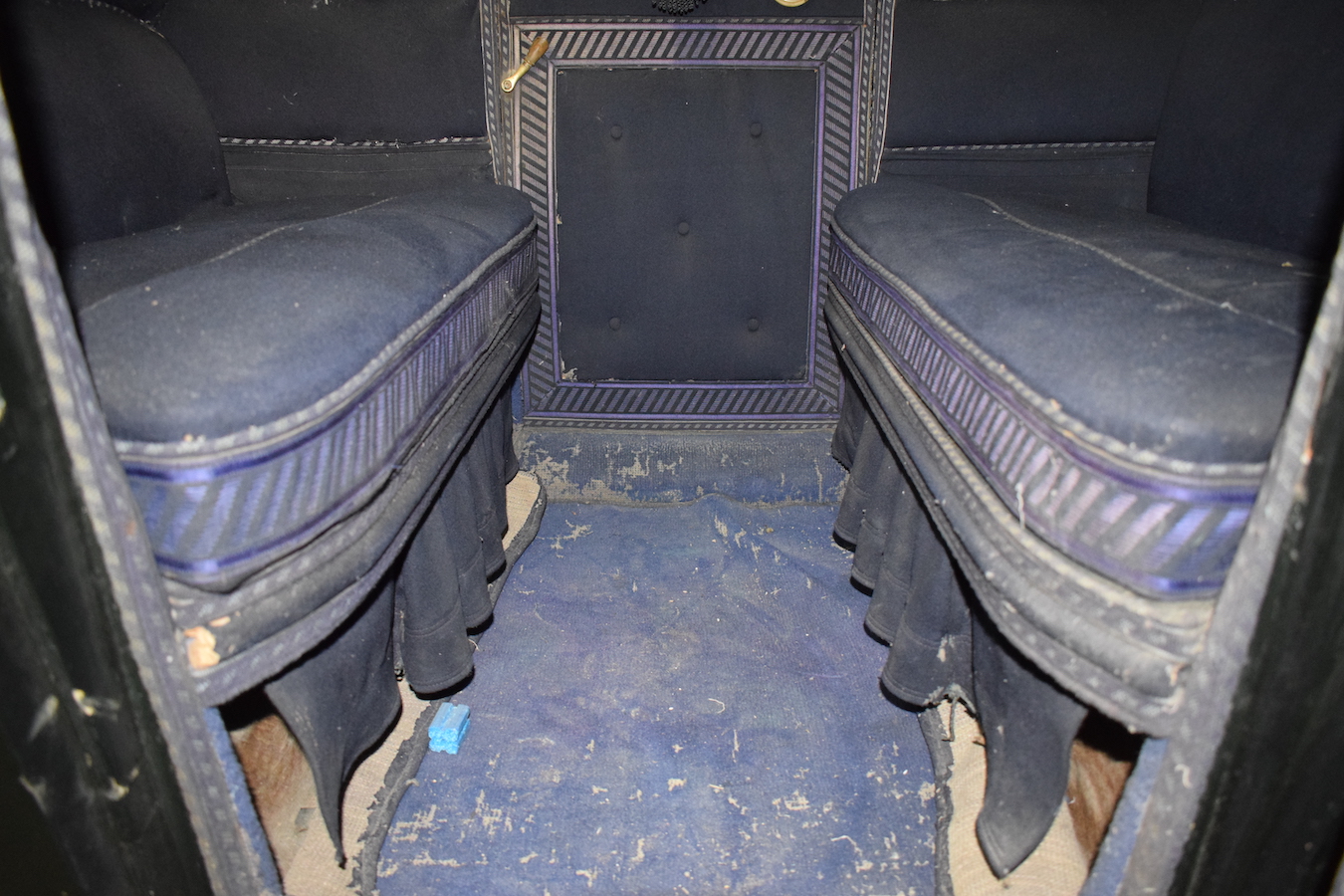 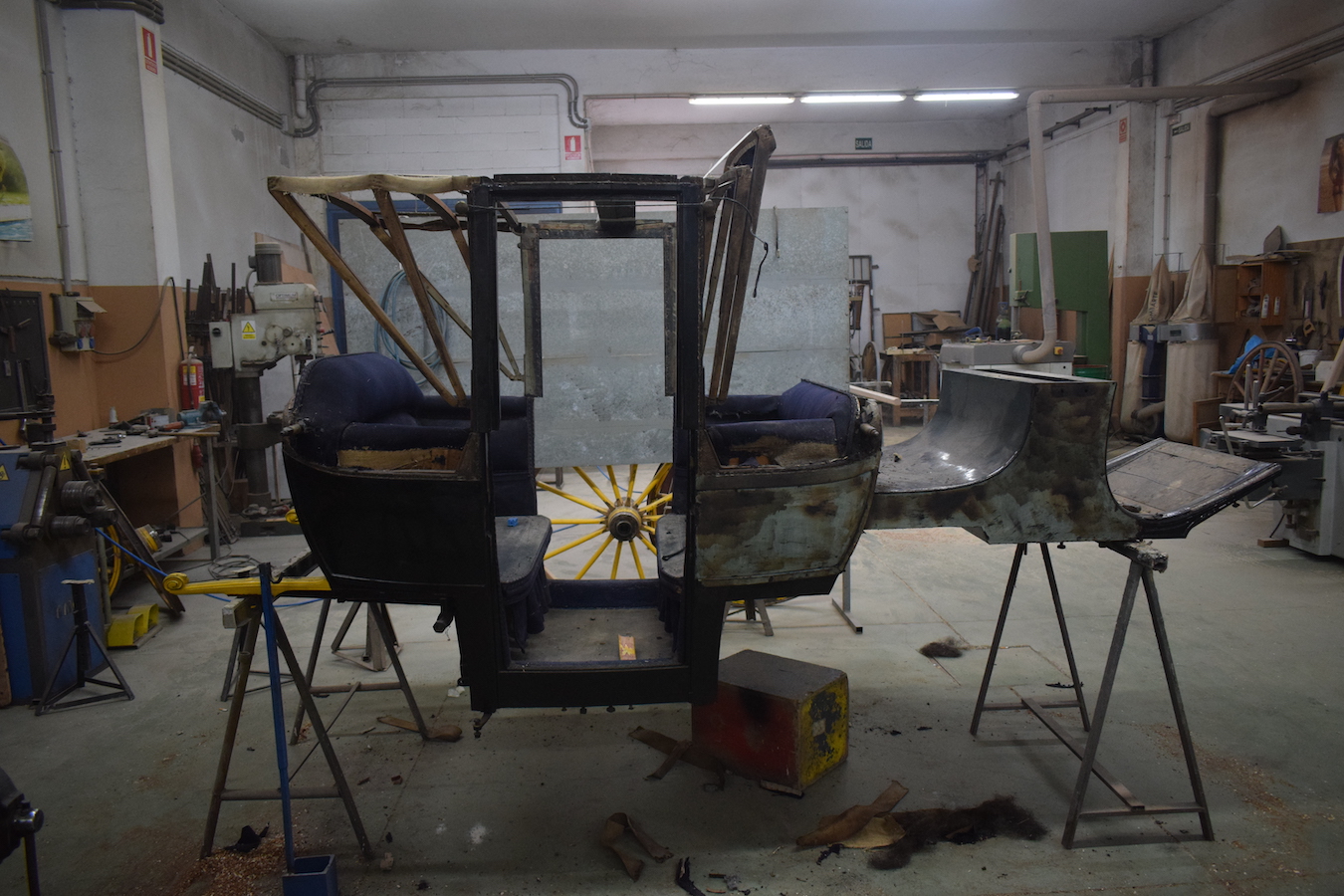 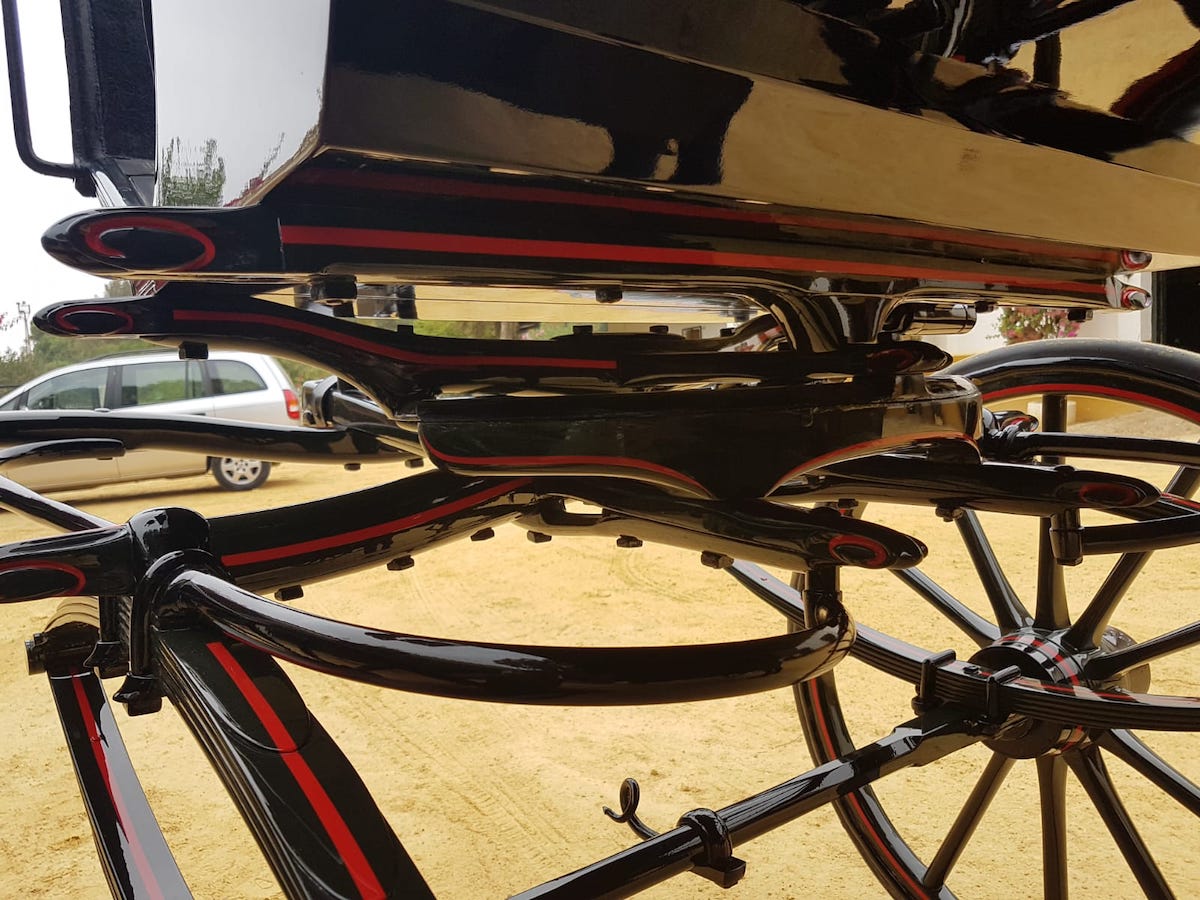 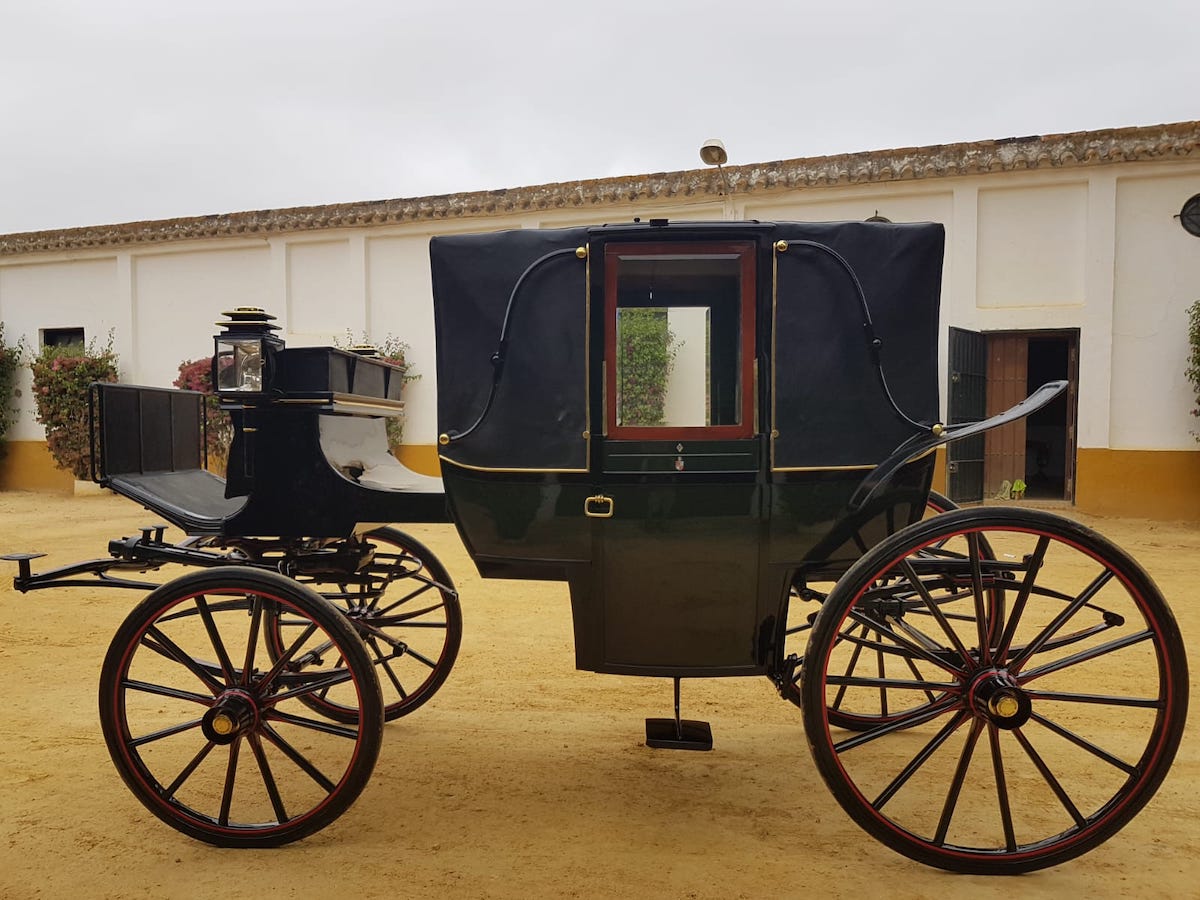 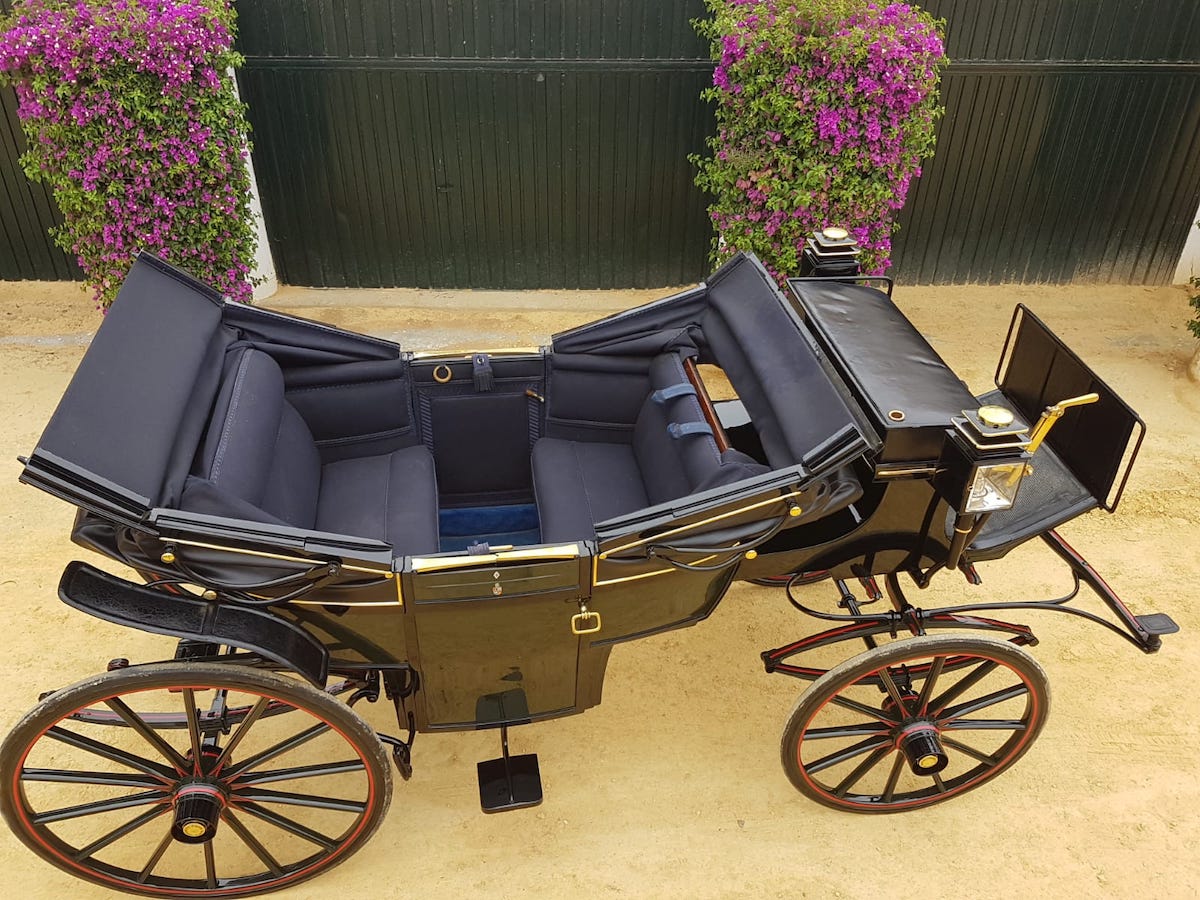 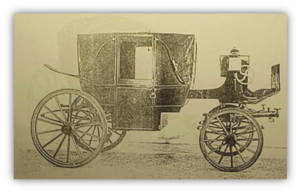 This type of carriage is original from the city of Landeau in Germany from which it receives its same name.

At the end of the eighteenth century began to appear these first models of carriages, with square box and also with the round box, to be called luxury coach was widely used in large ceremonies and even in Imperial Houses.

It was in 1850 in France where it began to perfect its shape and later in England, where from that date became one of the most used carriages at all times, discovered in summer and covered in winter.

The hoods open and close very easily backwards and forwards and the box remain completely airtight, which is why it used to travel even on rainy days.

In the specific case of this restoration we have a model made by the nephews of the famous French body builder Jean Henry Labourdette. They arrived in Madrid in 1903 and started their own business in 1905. The Royal Stables began to buy carriages from them, so it was usual to see in their catalogues the description of “Suppliers of H.M. the Queen and of LL.AA.RR. the infants of Spain”.

Particularly noteworthy is the mismatch of the box as a result of the contraction and expansion movements of the wood has caused cracks and fissures in side doors, door and deterioration in the lower part of the floor.

These fissures, existing in the whole piece, show a clear instability in the joints of the wood and are sources of rot of this already clearly affected by the attack of xylophagous insects. All this causes the frame to be very weakened and does not adequately fulfil its supporting function.

On the other hand, the loss of filling of the seats together with the microclimate incidents and other deterioration agents that the piece has supported, has generated multiple deformations in the upholstery.

Finally, it is possible to see highly visible breaks and loss of various points of seams in the folds of the hood.

The proposal of action is approached under the principle of material conservation and complete recovery of the functionality of the vehicle, but respecting its authenticity, through a minimum action as far as its material and chromatic reintegration, respecting at all times the fundamental principles to be taken into account in any action: stability, reversibility and discernibility.

Within the different works developed and after the corresponding cleaning, disinsectation and consolidation safeguarding its original state we proceed to clean the oxidation, polishing and adjusting all the deformations of the metals together with the primer and painting with the colours green and black filleted in red, including the doors of the sides.

We emphasize the upholstery in blue cloth fabric along with the complete replacement of the black leather hood.

Finally, the project, after the intervention carried out, has been concluded with satisfaction, surpassing the main objective of the work, describing step by step each process of the restoration so that the “Landau” carriage recovers its aesthetics and functionality.

The whole process is written up in a final report with the corresponding photographic documentation, technical sheet and recommended preventive conservation plan that is given to the client.